DOLPHINS come to the assistance of one another by joining together to lift an injured or ill dolphin to the surface of the water to enable them to breathe and thus survive.

Like the Dolphins, the Child Advocacy Center exists to provide a safe, child-friendly, healing environment for victims of child abuse. This is the story Susan Towne shared with us, and thus, the Dolphin House.

MY STORY OF DOLPHINS: Susan Towne

Almost a decade ago, while working with victims of domestic violence and sexual assault, I met a woman whose three daughters were violated sexually by their stepfather. The daughters, assaulted as young children, were now in or entering their teenage years.

During one of our conversations, I told the mother a story about dolphins. I explained that dolphins live in groups called pods, coherent long-term social units. Dolphins are often observed stroking each other with their flippers, indicating that they require physical contact much like humans.

Mother– calf bonds are long lasting; a calf typically stays with its mother three to six years or more. Adult males also develop strong and long-lasting bonds. Large adult males often roam the periphery of a pod, and may afford some protection against predators.

If a bottlenose dolphin is drowning, other dolphins will come to its aid. They will support the drowning dolphin with their bodies, keeping its blowhole above the water and allowing it to breath.

I told the mother and her daughters that we would be her "dolphins." We would hold them up so they could breath, and we would form a ring of protection around them and stay beside them until they completed their healing process. Following their healing, we would then release them to live their lives normally once again.

[On April 30, 2013, these three, now adult young ladies returned to the Dolphin House to visit the Staff and tell them how thankful they were that the Dolphin House was there when they so desperately needed the help. They shared: It is people like you that got us where we are today. The sentencing our stepfather received and the strength we were given to put him behind bars lies solely in the fact that people like all of you opened your hearts to us and helped us speak AND heal. We are blessed to be a part of the Dolphin House.] 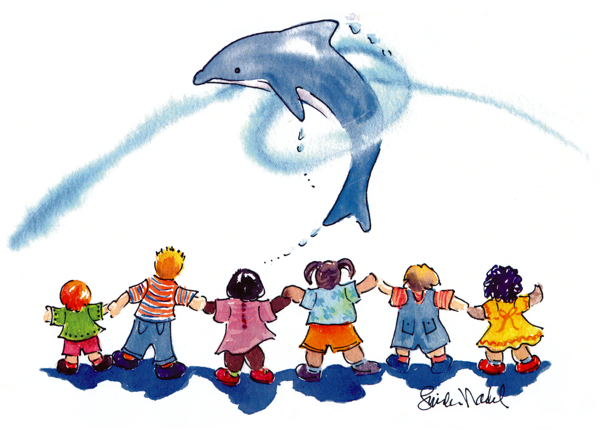